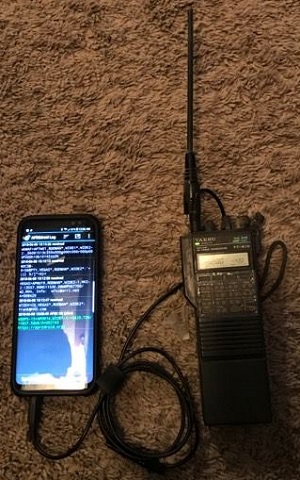 I shamelessly stole this idea from a post by KC7IPV on 4x4Ham.com.

I have fielded a number of questions and heard a number of comments on the expense involved in tracking rockets using APRS systems. Buying an HT or mobile with built in APRS receiving and display capabilities can be a major investment. With the cost of the transmitter being well over $200 for a turnkey item another $400 to $500 in ground equipment can put it out of many flyers’ price range. By reducing the cost of the receiving equipment by 75% or more it may make APRS a more attractive option. This does assume you have a smart phone and a ham license.

I have been looking into using APRS (Amateur Packet Reporting System) for tracking high power rockets. APRS is a method to encode digital data on an audio signal compatible with commonly used FM Ham Radio transceivers. I have been using APRS trackers for hiking, 4-wheeling, high-altitude balloon tracking, and other uses since the mid 1990s.
An Amateur Radio license is required to use this equipment, but licensing is fairly simple and there are plenty of study guides online.
Since there is no need to transmit to the rocket, you only need to be able to receive and decode APRS. For the receiving station, I use an HT or scanner and a cable to adapt to my phone. This is the same cable detailed below, except only for receive. I can decode regular APRS on 144.390MHz, as well as APRS format data on UHF from specific rocket trackers.
Among the most popular rocket trackers are the units made by Big Red Bee. They are self-contained, very small and light, and programmable throughout most of the 70cm band. There are a number of other manufacturers who make small APRS trackers, and on larger rockets there are more options. This article is focused on the receiving end of the system. I have an article on mounting a Beeline GPS tracker, also.
I tested this rig at home, at the June 2018 ROCstock rocket launch, and BALLS27 with good results. 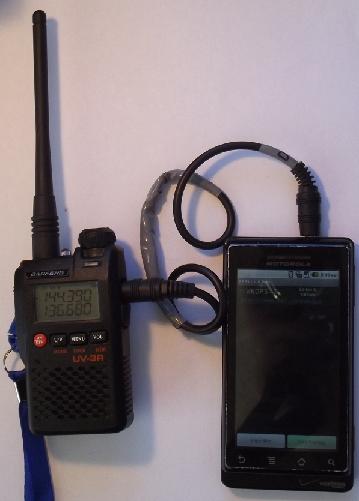 As a matter of fact, I bought the Baofeng radio specifically because it has VOX and for use specifically with this project when used as a two-way APRS node. For receive only, almost any receiver for the frequency being used will work.

The interface cable uses two contacts from a four contact, 3.5mm, plug on each end–of course not the same pins! Three pins are used for two-way communication. The plugs are the same as the one used by slightly older Yaesu HTs.
I was able to find the pinout for the Baofeng on the Yahoo Group for the radio, and chopped up a Yaesu cloning cable and re-arranged.
I did put 500 ohm resistors in the audio lines to reduce the drive into the mic inputs a bit.

Hopefuly some of that is clear. Here is an attempt at a drawing:

Where I bought the HT

Where you can get connectors

Dates are subject to cancellation due to Covid-19 restrictions and/or weather concerns.