by Brother John (Van Norman), Ministry of the Rocketeer 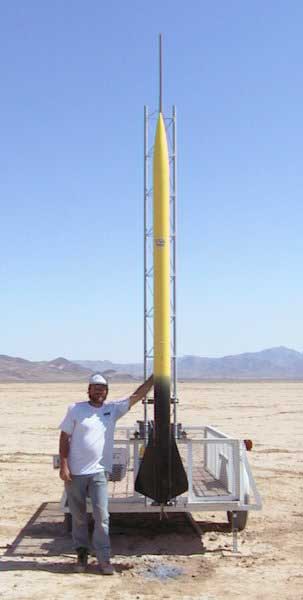 I see this one coming. Hey, gang, we’s got another one!! You might as well go ahead a get two rockets. Follow Mike [Solo’s] advice–get something [like a 3″ or 4″ kit] with a 38mm mount and adapt down to 29mm to cert. Then start on the other one right away with a 54mm mount you can adapt down to 38. Here how this works. The facts of life– I’m about to tell you your future, so listen up!!

No sooner than you cert you’ll want to jump from H’s to I’s, soon as you fly an “I” you’ll be an addict (like the rest of us) and want to cert again, go to J’s and K’s (which is where the other rocket comes in). Then you’ll go broke buying hardware and reloads and have to drop back to the 38’s for a while until to pay off all your Credit Cards. But you’ll have two rockets that can do 38’s (and one that can do 29’s depending on just how far your fall from financial security is) to fly till your bankruptcy clears the courts. After that it’s a downward spiral, a black hole, if you will–next thing you know you’ll be thinking crazy things, voices in your head wispering numbers like, “75” and “98”, and letters like “L” and “M”.

If you’re thinking electronics a short while down the road decide which unit your going to use now, or at least start your research, because you’ll end put owning two or three (Unless your like Kurt and can keep winning them at the raffles). It may have a bearing on what diameter rocket you want to build. Some fit right nicely to a 2″ tube–some, like the Olsen’s, are great little units and easy to use, (bet I get mail about that comment!!) but are really, really tricky to get into a 2″ tube. Oh, it can be done, I did it at RS in the “Double D” but it was a royal pain. But, again, it won’t matter–once you build a 2″ you’ll want to build a 3″, then 4″ then 5.5″, ah, heck with it, you might as well start on a 8.5″–next thing you know your whole house, garage and shed looks like an Titan assembly line.

Ah, I hear what your thinking, we all do!! Surely, you think I jest! You say to yourself “Naw, L1 is enough for me” Just like you thought B’s and C’s, then D, F, and G’s were enough such a short while ago. Sorry, my new friend, just by the questions you’re asking we can all see you’ve gone over that line on the lakebed, and down a road from which there is no return–I’m afraid for you there is no turning back. But, there might be one and only one hope for you–are you married??

Everyone who will testify as to this being the truth say Amen!!

My name is John and I’m a ROCaholic!!

Dates are subject to cancellation due to Covid-19 restrictions.